Tune in Friday, April 17th at 5 pm PT / 8 pm ET. This week’s show is LIVE so call in to Voice America with questions and comments at 1-866-472-5788, join the discussion on Facebook or Twitter, or e-mail me via tristan(at)puckerup.com and I’ll read them live on the air. Tune in to Sex Out Loud every Friday, you can listen along on your computer, tablet, or phone, find all the ways at SexOutLoudRadio.com! 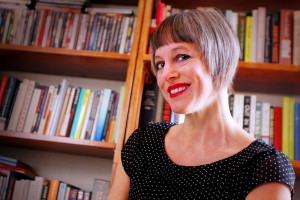 Lynn Comella, Ph.D. is an Associate Professor of Gender and Sexuality Studies at the University of Nevada, Las Vegas. She is the recipient of the 2015 Nevada Regents’ Rising Researcher Award, which is given annually to one faculty member from UNLV, UNR, and DRI in recognition of early-career accomplishments. An interdisciplinary scholar trained in cultural studies, her research is motivated by a desire to better understand a number of broad sociological themes, including the relationship between gender, sexual politics, marketplace culture, and consumer capitalism. Her work has been published in the International Journal of Communication, Feminist Media Studies, The Feminist Porn Book, Sex for Sale, and New Sociologies of Sex Work, among other venues. In addition to her numerous publications in peer-reviewed academic journals and books, Dr. Comella has researched and written more than 45 articles about sex and culture for local and national media outlets. She has reported on the state of sex education in Nevada, the history of prostitution in Las Vegas from 1905 – 1955, and the growth of women’s erotica, among other topics. She is the co-editor of New Views on Pornography: Sexuality, Politics, and the Law (Praeger, 2015) and is a contributor to Best Sex Writing of the Year (Cleis Press, 2015). Dr. Comella received a Ph.D. in Communication from the University of Massachusetts, Amherst; an M.A. in Gender Studies and Feminist Theory from the New School for Social Research; and a B.A. in Psychology (Highest Distinction), with minors in Anthropology and Women’s Studies, from The Pennsylvania State University.