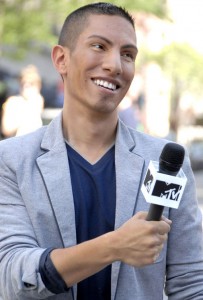 This week’s episode of Sex Out Loud features our final interview from the CatalystCon series with Francisco Ramirez, known for giving Free Sex Advice on the streets in NYC every week, answering questions about relationships, sex, and dating. He’ll discuss the inspiration for his project, how he’s turning people’s stories into a podcast, and the phone app he’s developing. Then, Airial Clark, known for her site TheSexPositiveParent.com, will be interviewed live in the second half of the show. Clark has created sex education curriculum and led workshops where she provides parents and caregivers the tools they need to become the resident sexuality expert for their families.

This second half of this week’s show is live, so find out all the ways to listen here and you can call in with questions at 1-866-472-5788, join the discussion on Facebook or Twitter, or even e-mail me via tristan(at)puckerup.com and I’ll read them live on the air!

Francisco Ramirez holds a Master of Public Health (concentration in sexuality) from Columbia University. For 15 years, Francisco has addressed the sexual health needs of diverse communities worldwide. He is a long-term consultant at the United Nations and has led multi-lingual education initiatives for: the UN, MTV Networks, Planned Parenthood, New York Academy of Medicine, and the NAACP. Since 2008 Francisco has offered Free Advice on sex to passersby in NYC parks. He is a prominent voice in the media on sex. At MTV Voices and MTV Staying Alive, he is an on-camera host and producer of sex-related content. In 2010 he guest-hosted the Savage LoveCast with Dan Savage. Currently, he is developing an original TV series and co-hosting a forthcoming web series on sex. Francisco lectures at universities and is creating a mobile app focused on sex ed. Francisco has worked in over 10 countries and is based in NYC.

Airial Clark, M.A is the founder of The Sex-Positive Parent. She has a Master’s degree in Sexuality Studies from San Francisco State and also a rambunctious single-parent of two teenage sons. Airial graduated from UC Berkeley in 2007 with a BA in English Literature and Anthropology. She is a contributing writer for the San Francisco Bay Guardian, Oakland Local, Good Vibrations Magazine, the Sex Positive Photo Project of the SF Bay Area and Shades Magazine. Airial presented her graduate level research on the intersections of race, non-monogamy and parenting at the Open SF conference and will be presenting two sessions at this year’s CatalysCon West. Airial sees the mission of her work to provide strategies and support for sex-positive parenting; specializing in community building for parents with alternative sexualities. She leads parent-education workshops, provides one-on-one parent coaching and consults other sex educators on how to include parents in their work.