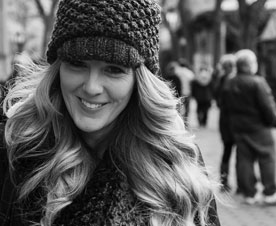 Recorded live in front of a studio audience at CatalystCon West, this Friday’s episode of Sex Out Loud features award-winning writer and director, Jacky St. James. We’ll discuss how she got into the adult entertainment business, why she’s an advocate of couple’s-oriented pornography, and how she achieves her goals to provide the highest quality content in the adult marketplace while also creating a greater sense of sexual freedom and openness through her work. Jacky St. James will also talk about the role of a good girl….and why good girls like it bad.

Jacky St. James is an award winning writer and director in the adult entertainment industry. She is known for creating a wide range of films, from romantic comedies to edgier all-sex releases, with her most acclaimed titles being: Torn, The Friend Zone, Power and Control, The Submission of Emma Marx, and The Temptation of Eve. During this past 2013 award season, Torn (which St. James wrote and then subsequently co-directed with Eddie Powell) took home multiple awards including: Best Actor, Best Actress, Best Couples’ Release, and Best Screenplay. Throughout her career in adult, St. James has been an advocate of couple’s-oriented pornography and has been a guest speaker UC Santa Barbara, UCLA, AEE, Exxxotica, XBIZ 360. She has been featured in several popular mainstream publications including Jezebel, Slate, and the Examiner. St. James shares pictures, clips, and stories about her successes and debacles as a woman working within the adult industry on her website, missjackystjames.com.