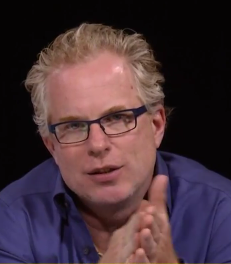 This Friday on Sex Out Loud at 8 pm ET / 5 pm PT, I’m live with Christopher Ryan, the renegade researcher behind the New York Times bestseller, Sex At Dawn, a controversial, idea-driven book that challenges everything you know about sex, marriage, family, and society. We’ll discuss the ideas behind the book including monogamy, sexual orientation, and family dynamics, as well as his latest project, KoTango.com. Kotango is an ethical non-monogamy site, a global community dedicated to modern relationships, and the culture that surrounds them.

Christopher Ryan received a BA in English and American literature in 1984 and an MA and Ph.D. in psychology from Saybrook University, in San Francisco, CA twenty years later. He spent the intervening decades traveling around the world, living in unexpected places working at very odd jobs (e.g., gutting salmon in Alaska, teaching English to prostitutes in Bangkok and self-defense to land-reform activists in Mexico, managing commercial real-estate in New York’s Diamond District, helping Spanish physicians publish their research, Ebonics to English translation for a Spanish film festival…). Along the way, he decided to pursue doctoral studies in psychology. Drawing upon his multi-cultural experience, Christopher’s research focused on trying to distinguish the human from the cultural. His doctoral dissertation analyzes the prehistoric roots of human sexuality, and was guided by the world-renowned psychologist, Stanley Krippner.