Today, December 26th, is our last live episode of Sex Out Loud on Voice America (don’t worry – I’m not leaving radio/podcasting forever, just ending an amazing run on the Voice America Variety channel). I’ll be live chatting with a dear friend of mine, Dr. Winston Wilde, sexologist and therapist discuss our experiences with sexual fetishes. We will discuss why they scare people, how to safely act on them, and what place they have in the diverse spectrum of human sexuality. Dr. Wilde will also discuss his work with the Desert Center for Sexuality whose public services promote sexual health and happiness, provide sex education to diverse audiences, create and sustain community, and expand the awareness of sexual culture through art. 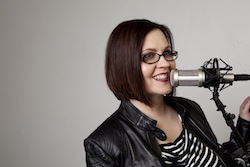 This week’s show is LIVE and it’s your last time to call in to Voice America with questions and comments at 1-866-472-5788, join the discussion on Facebook or Twitter, or e-mail me via tristan(at)puckerup.com and I’ll read them live on the air. Tune in to Sex Out Loud every Friday, you can listen along on your computer, tablet, or phone, find all the ways at SexOutLoudRadio.com!

Dr. Winston Wilde received his Masters in Clinical Psychology (MA) fromAntioch University, Los Angeles, 1997, and Doctor of Human Sexuality (DHS) from the Institute for the Advanced Study of Human Sexuality in San Francisco in 1999. As a psychotherapist, he is licensed by the State of California (#MFC39060) at the Board of Behavioral Sciences in Sacramento and is a member of the California Association of Marriage and Family Therapists. After years of endless documentation, he was finally certified by the American Association of Sex Educators, Counselors and Therapists as a Sex Educator (2002), Sex Therapist (2004) and Sex Therapy Supervisor (2009). He is serving as Advisory Committee Chair for the Monette-Horwitz Trust and is the past president (2010) of the Western Region of the Society for the Scientific Study of Sexuality. Born in Hollywood, raised in Santa Monica, Wilde has travelled many places in the world, but always come back to Our Village of The Angels. His life has been circuitous, taking him into paths untrodden, into radical sexualities and diverse spiritual practices. Other adventures include sexology conferences in Cuba and India, radical faerie gatherings and Old Guard traditions, trekking the Himalayas, observing days at a time of devotional silence, Buddhist monastery stays, and helping mid-wife people as they die.