When Doctor X. Treme was a child he dreamed of becoming an inventor. His aspirations led him to the field of physics and his studies earned him a PhD from Yale University. After graduation the Doctor took a job in a government lab. He spent the next six years erecting quantum measurement devices for low temperature physics. While the work was engaging, Treme found it constricting and oppressive, like wearing pants. He grew weary of the military’s involvement in his field. To the Doctor, applied physics was about more than advanced weaponry. One fateful night, his wife made a simple request. “Build me a sex machine?” she asked. And just like that, Doctor X. Treme quit his government job, took off his pants, and got to work. These days, the Doctor dedicates his time to coupling science and technology in the bedroom. He researches ways to use physical principles to enhance the lives of (extra)ordinary people. 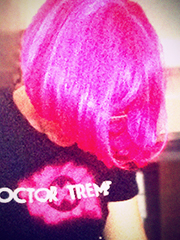 Alexandra Ars manages the brand, designs the web and brews the tea for Orgasmatronics, Inc. She co-founded the company with Doctor X. Treme. Alexandra used to be a graphic designer for a jewelry company, several bands and, for a little while, Mozilla. But when Dr. X. elucidated his vision of a queer sex toy company while they waded in a freezing river she knew she had to help make the dream a reality. She is a kinky, polyamorous, bespectacled drummer. She believes socks and scarves are the sexiest items of clothing especially when worn exclusively. Alexandra loves the Ambrosia Vibe bionic strap-on for it’s simplicity and body-hacking and gender-bending possibilities.

One Response to “Oct 3: Doctor X Treme & Alexandra Ars from Orgasmatronics on the Ambrosia Vibe and their mission of Less Pants, More Science”