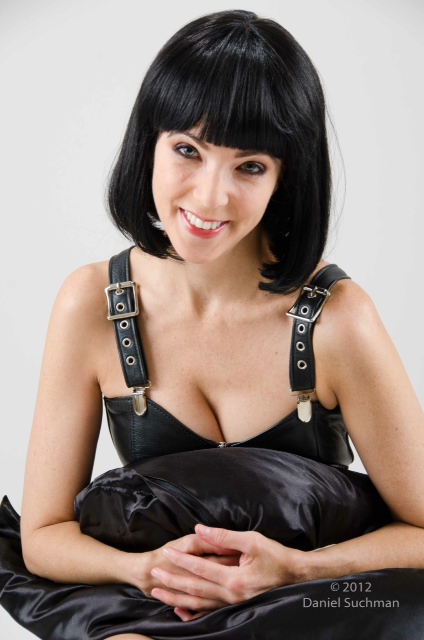 A new installment in our CatalystCon West 2013 series of episodes recorded in front of a live studio audience, this week on Sex Out Loud radio I interview Cunning Minx, the poly and kinky sex-positive educator and activist who has been the producer and host of the Polyamory Weekly podcast since spring of 2005. Minx will share how she got into polyamory, sex education, and podcasting, and how those lessons inform her teachings on poly, kinky and Web 2.0 community-building topics. Plus, she answers questions from the studio audience.

Cunning Minx is the sultry-voiced producer and host of the Polyamory Weekly podcast, now with over 300 episodes in production. The podcast shares tales from the front of responsible non-monogamy from a pansexual, kink-friendly point of view. A kinky boobiesexual, Minx founded the show as a resource for the poly and poly-curious to form a community, share experiences and help guide each other on their journeys of poly and kinky exploration. Minx has been a submissive, bottom and otherwise generally non-dominant type for the past ten years. Minx has spoken on poly, kinky and Web 2.0 community-building topics at ShibariCon, Geek Girl Con, CatalystCon, MomentumCon, Atlanta Poly Weekend, Sex 2.0, Leather Leadership Conference, Dragon*Con, GD2, Heartland Polyamory Conference, New York Poly Pride and Poly Living. The Poly Weekly podcast is the winner of the 2007 Erotic Award for Best Podcast and has received accolades from ErosZine, Fleshbot and the Chicago Sun-Times.