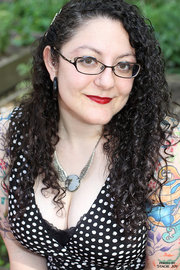 This Friday on Sex Out Loud, I talk to writer, media maker, and crusader for people in the sex industry Audacia Ray about her role in the sex workers’ rights movement. We’ll discuss the work she does with the Red Umbrella Project, an organization she founded and directs as well as her thoughts on strategies for increasing awareness of the myriad issues facing sex workers. Plus, she’ll address her controversial remarks at this year’s Momentum Conference, and tell is why she no longer identifies as a sex-positive feminist. This will be a live show, so be ready to join in the conversation online and call in with questions!

Audacia Ray is the founder and director of the Red Umbrella Project, where she works to amplify the voices of people involved in the sex industry. At the Red Umbrella Project, Audacia hosts monthly live storytelling events and a weekly podcast, leads media and storytelling workshops, and provides communications support and leadership for individuals and communities who wish to tell their stories and reframe public debate. In 2010, the Village Voice named the Red Umbrella Diaries series and Audacia’s blog Waking Vixen to their Best of NYC list. As the Program Officer for Online Communications and Campaigns at the International Women’s Health Coalition and a communications consultant for the Global Network of Sex Work Projects, Audacia has worked with activists all over the world to build communications strategies around challenging topics like youth sexual health, sexual rights, HIV, and sex work.

Her skills are rooted in years of experience as an activist, writer, and media maker. Audacia is a former sex worker who was an executive editor at the Utne Reader award-winning $pread magazine for three years and is the author of Naked on the Internet: Hookups, Downloads, and Cashing In on Internet Sexploration. She has been blogging about sexuality and culture since 2004, and has shot and edited a variety of videos and video podcasts, including Naked City TV, a twenty-two episode documentary video show that she produced for the Village Voice in 2008. Audacia also developed a syllabus and taught as an adjunct professor of Human Sexuality at Rutgers University for three semesters. She has a BA from Eugene Lang College at the New School and a MA from Columbia University.