Courtney Trouble is a film-maker, published and celebrated photographer, queer rights activist, DIY genius, and an award-winning feminist pornographer. Courtney is the founder of NoFauxxx.Com and QueerPorn.TV, as well of the director of 12 full-length films.

The freedom with which our stars express their own sexuality and appetites has resulted in content that can only be called genre deﬁning.

Live Sex Show
Courtney Trouble’s 12th film, entitled Live Sex Show, was shot in front of a live audience of 200 people at 2010’s San Francisco’s Masturbate-a-Thon. Starring Nina Hartley and Jiz Lee in an educational yet filthy scene, April Flores and the Matador in a dramatically-lit, sexy love story, and Courtney herself in a climactic surprise 5-on-1 porn-star-on-director gang bang! This film marks her very first independent release under her new company TROUBLEfilms, which will umbrella all of her films, video projects, and porn web sites. Live Sex Show was filmed with major help from Carol Queen and Robert from the Center for Sex and Culture, and will partially benefit their Center financially through DVD sales and screenings.

Reel Queer Productions
Courtney Trouble has directed and edited 11 films for Reel Queer Productions, a video house she helped build with Good Releasing that documents authentic, edgy, queer sex and culture with relevant, intelligent films inclusive of the many sexualities that identify as queer. Among these titles are 4 plot-based hardcore films and the award-winning Roulette and Seven Minute In Heaven series. These films are available for sale and streaming VOD around the world, most notable from Courtney Trouble herself at her website CourtneyTrouble.Com.

“Being on both ends of the camera is important to me,” says Trouble. “Having sex on film is an extremely intimate act, and it’s something that I take seriously for many reasons. First of all, I find it insanely arousing fucking friends and sometimes strangers on film, it’s a high I can’t find anywhere else. Also, It’s a political act for me – my body deserves to be seen and publicly acknowledged as insanely sexy – and the way I fuck as a queer femme switch is enlightening and inspirational to people of all sexualities. And, logistically, it tremendously helps me direct. I think knowing what it’s like in front of the lights and the crew makes me a better director, I’m more prepared for the emotional, technical, and social aspects of shooting a hardcore scene.” 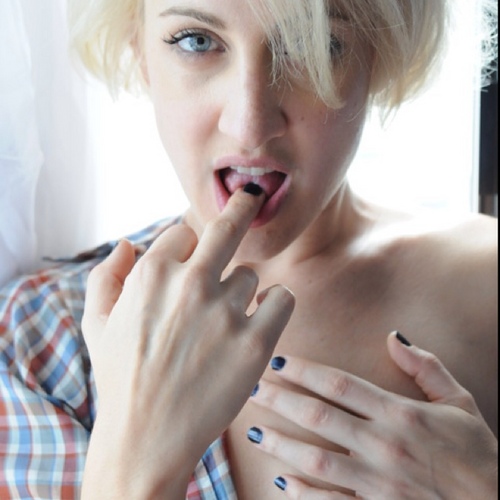